When employers are worried about their bottom line, they may not always take the time to treat their employees with proper respect and consideration. While this is not always against the law, it is possible for employers to commit disability discrimination if they do not provide reasonable accommodation for workers or if they otherwise violate 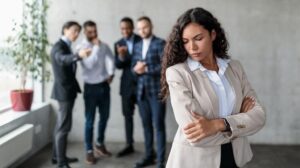 Employment laws play an important part in allowing workers to feel that their rights and their jobs are protected. In many cases, workers may need to enforce their rights under various laws in order to ensure that employers do not carry out illegal actions in the workplace. Of course, many workers may be hesitant to

Sexual harassment is rampant in workplaces nationwide, including in California. However, not all workers understand that this type of harassment can take on many forms. It could even involve one person being sexually harassed by a colleague of the same gender.   Examples of behavior that is prohibited Verbal conduct Making insults, jokes, slurs or

Some workers fear reporting violations of their rights

For workers in California, the fear of losing their jobs or facing other retaliation might prevent them from reporting violations of their rights. However, the law is on their side. It is a good idea to become familiar with the available steps they could take should their rights ever be violated. The law protects employees

Much of the U.S. was shocked to hear allegations of sexual harassment against some of the most powerful people in the entertainment business. These reports brought to the public eye how prevalent the problem of inappropriate, illegal and abusive behavior can be in the workplace. While women are often the victims of sexual harassment, particularly

Pregnant employees in California have protections and rights

California employment law protects employees of businesses with five or more workers. Women have rights to reasonable accommodation related to mental and physical conditions during pregnancy or loss of pregnancy and childbirth. No form of discrimination against pregnant women is allowed. Under certain conditions, parental leave of up to 12 weeks is permitted within the