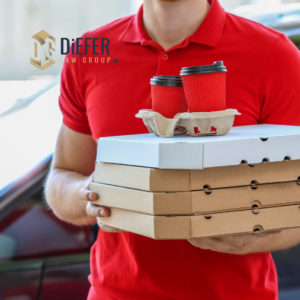 Given the rise of COVID outbreaks throughout California, many consumers have turned to ordering takeout orders from restaurants they once physically frequented. This in turn has expanded the demand for delivery drivers.

In the state of California, workers’ comp laws state that workers can apply for workers’ comp benefits for injuries “arising out of and in the course of employment.” But this doesn’t apply to all workers; there’s one exception in particular: independent contractors.

The classification of the worker will generally depend on whether they can collect benefits.

In late 2019, Governor Newsom signed a law that outlined three specific conditions that, if met or not met, would determine whether a worker was to be considered an employee (and thus eligible for workers’ comp benefits) or an independent contractor.

DoorDash is a prime example and is considered to have the largest food delivery market share in the United States. Drivers picking up and delivery food for DoorDash use their own vehicles, set their own hours and dress codes and are paid a flat fee to pick up and deliver pizza, subs, entrees – you name it – to consumers. Uber Eats and Grubhub have also gained a significant share of the delivery ride service market share in recent months.

Amid the continued uptick in demand, it remains to be seen whether these, or other on-demand perishable delivery drivers will continue to remain independent contractors in California or the law will change. If in doubt, consumers should contact a legal representative to determine if a specific job would be eligible for workers’ comp benefits in the event an injury occurred.